"Zerdin is a powerful stage presence. Having been a regular TV guest, surely its only a matter of time before he is fronting his own show."The Herald- Scotland

The Country Has Ever Produced 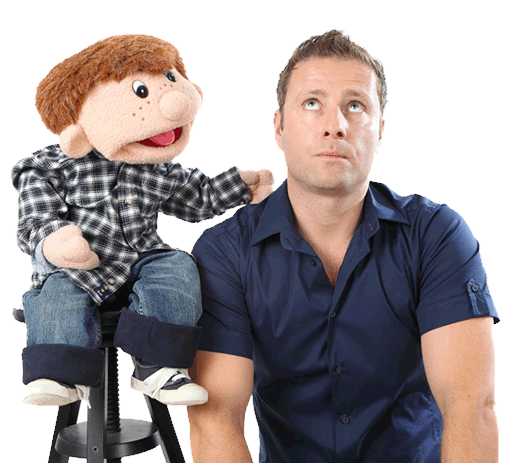 Paul Zerdin is without a doubt the UK’s number one ventriloquist, he has managed to make the art cool again, with appearances at the Royal Variety Show, numerous Edinburgh Fringe performances and even a tour to India’s Comedy Circuit, Paul really is a big deal! When Paul was 10, a family friend made him a puppet theatre which he used to put on shows. As he is the first to admit, his hobby quickly grew into an obsession. “The real turning point was when I was given a book on ventriloquism by the legendary Ray Alan.  By the time I hit my teens I was spending half an hour a day in front of the mirror practising talking without moving my lips.”

A Mixture of Stand Up and Ventriloquism..

From Ray Alan through to Keith Harris, ventriloquists have been a staple of UK entertainment for years, but it has taken Paul Zerdin to bring his mix of stand-up and ventriloquism to the forefront of contemporary entertainment to truly put ventriloquism on the comedy map. Its Pauls winning combination of these that has really excelled his career, the technical skill, hilarious ventriloquism, charm and impeccable timing has earn him endless 5 star reviews and continues to do so. Paul’s live shows exert his great versatile performance abilities, acting out several characters that range from the cheeky pre-adolescent Sam, the belligerent OAP Albert to the precocious infant baby, Paul can crucially appeal to both comedy clubs and mainstream audiences in equal measure.

Is That The Spice Girls Next Door?

From Standing in front of his bedroom mirror talking to himself to performing in front of the Queen at the royal variety performance, Paul’s career really is second to none. It all began when Paul made his TV debut as a magician on the BBC’s Tricky business, he then landed himself a contract presenting the disney produced kid’s programme Shine for GMTV. His career blew up even more after winning LWT’s The Big Big Talent Show, this not only raised his profile but Paul was fortunate enough to meet Nigel Lythgoe, the man who would eventually go on to create reality shows such as Popstars and American Idol. Honest Paul said the most surreal moment was when he secured a spot on the Prince’s Trust Gala Show in 1992, where he was in a dressing room right next door to The Spice Girls and Frank Bruno.

“Technically immaculate, it’s what he does with his slick talent that really sets him apart. His relationship with the characters has all the dramatic tension of a real life double act”
– The Guardian